Krushnaji had written a series of lessons on KAS during 2000-2002 and he made them available to KAS Yahoo Group members. Mrs. Donna Quinn was kind enough to proof read the lessons and fix typos and grammar to make the lessons easily comprehensible. I am reproducing the KAS lessons here to support new KAS students. The only change I have made is to provide screen shots of charts from online KAS software which uses an improved KAS ayanamsa value than the one that students were using during 2000-2002.

Credits: All credits go to Krushnaji and Donnaji for providing this wealth of information.

Lesson 1: What is the Ashtakavarga System?

This system is devised as a numerical scheme of interpretation that lets us easily see a snapshot assessment of the strength of a house through a unique point system. The Ashtakavarga system is a method of calculating the powers of the planets relative to each other. Therefore, it can be used in any chart i.e. all the divisional charts, along with Chaleta Bhava charts (diurnal charts) and even with Horary Astrology. This system also gives the power of each planet for all twelve houses. For each and every house, all seven planets contribute their power or strength in terms of numerical value. This makes it easy to compare the powers of the planets for each house. There is no other system which can give such a clear cut view of the comparative strengths of all the planets.

By employing the Ashtakavarga system along with other principals, the following things can be determined with great accuracy:

The MOON distributes a total of 49 benefic points in the following pattern in a similar manner while each of the other planets helps to distribute them throughout their own assigned houses. Remember that the 1st column position always represents the natal position of each planet.

MARS distributes a total of only 39 benefic points in the following pattern:

MERCURY distributes a total of 54 benefic points in the houses:

JUPITER distributes the highest total of 56 benefic points like so:

VENUS distributes a total of 52 benefic points like so:

SATURN distributes only a total of 39 benefic points in the following houses:

The above shows a basic ashtakavarga table before all the points are filled in. The top row represents the houses in the chart. In order to avoid confusion as to whether the top row is the house or the numbered sign, I will add the names of the signs underneath the houses. In this table, the signs represent a chart with an ARIES lagna, but they will always rotate under the stationery house signs in the top row, so that the proper lagna sign for the chart will always go under the 1st house column. If for example, AQUARIUS was the ascendant for the chart, then the order of the planets starting under the 1st house house would be Aq, Pi, Ar, Ta, Ge, Ca, Le, Vi, Li, Sc, Sg, Ca. The side row lists the 7 planets. Each row will represent the individual planetsí point distribution throughout the houses in a numerical value from 0-8, zero being the weakest and 8 being the most powerful. At the bottom is a row for the totals of all the points accumulated for each column. The last column totals up the points in each row of planets. The accumulated totals for both rows and the columns will always be 337.
Let’s take an example and calculate the chart of a male, born on October 26, 1961 at 9:45am in Nagpur, INDIA, 21N09, 079E06. Use Krushna’s Ayanamsha. The charts will be shown in both Northern and Southern styles to accommodate individual preferences. 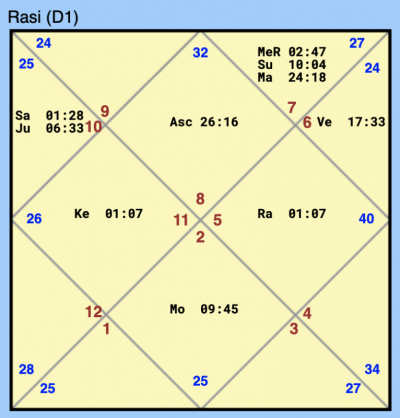 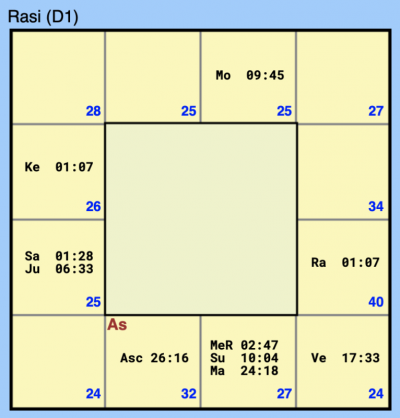 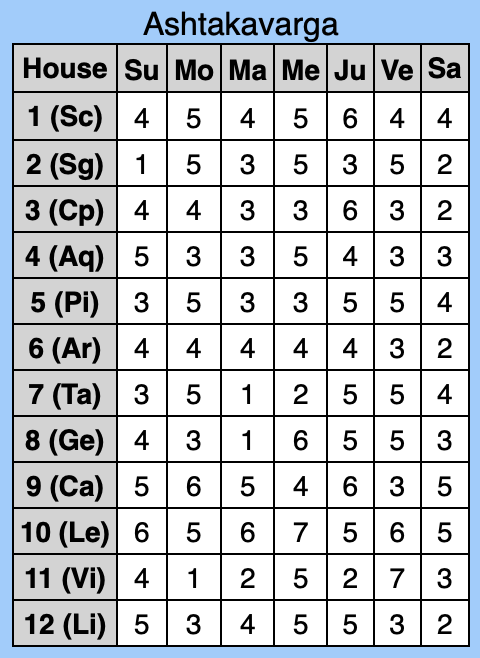 Here we can see that all the planets contribute various points to each house. Remember that minimum points can go as low as zero and the maximum can go as high as 8. No planet can have more than 8 points to a house.

My first Guru & my maternal uncle. One of the best astrologers I have known. He initiated me into Astrology.

My Guru who shared his knowledge selflessly and held my hand when I needed him the most.
Website: www.kasacademy.com

My mentor & teacher who is also a fellow student of Krushnaji. Anupji has been passing KAS knowledge to many students. Don't miss learning from his free course. You can also approach Anupji for professional chart reading.
Website: www.kascorner.com

I am a software programmer by profession with a passion for astrology & music.  My aim is to encode the knowledge of our seers of astrology to develop software systems that can support astrological consultations.